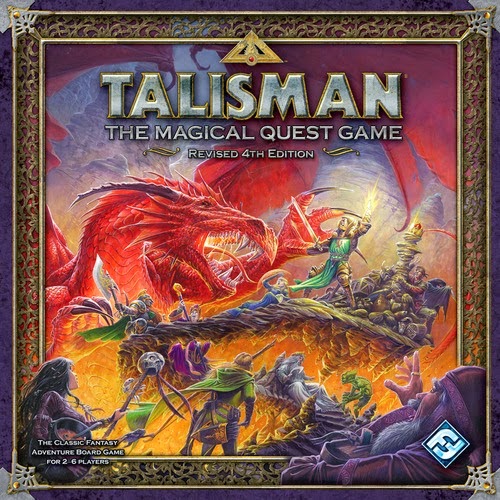 I recently found an old adventure game called Key to the Kingdom from an op shop. After perusing the rules, I mentally marked it off as a brainless roll-and-move adventure game with cool bits. Then one day, my son (aged 4) pointed it out in the game closet and wanted to give it a go. So we did with my daughter Jojo (aged 6) and to my surprise, we had a great time rolling dice and laughing at the random encounters. It was then when I decided that if we're going to play roll-and-move adventure games with cool bits, we might as well play one of the best ones out there, namely Talisman.

It's been years since I last played Talisman, and after bringing home a new 4th Ed copy from CanCon, I broke it out for the kids to play. I regulated the game which meant that I rolled for the monsters and read out the adventure cards. Jojo played the Prophetess while Evan played the Dwarf.

Jojo started out by visting the farmlands (Fields) and defeating monsters and spirits that were plaguing the area. She tried but was unsuccessful in landing on the Hermit to get the Talisman. Instead, she found a handsome Guide (who she announced was her boyfriend) and then a kind Wizard who gave her an Invisibility Spell which she used to get past the Sentinel to get into the middle-region. Hilariously, she drew another identical Guide card; it was obvious that this was the twin brother of the first Guide, and that they were both enraptured by the Prophetess's beauty, forming a love triangle. Jojo called them her 'boy-boys' and we had some fun over how they kept trying to out-do each other to impress her.

After some wandering, she visited the Warlock and when asked to give up one of her Guide followers to complete his Quest, she hardly batted an eye-lid ("That's okay, I've still got another one!") and handed over one of her fawning Guides to earn her Talisman. Heedless of the danger, she went to the Portal of Power with low Craft and miraculously managed to get through. However, she got lost in the Mines and ended up back in the Tavern. Later, she picked up an 'Immobility' spell (from the same Wizard) and used it to get past the Sentinel again. Much better prepared this time, she entered the Portal of Power, got through the Mines, mercilessly fed her last Guide to the Vampires at the Tower, fought the Pit Fiends, and made it to the Crown of Command to win the game. (Played with the Sudden Death variant where the player who reaches the Crown first wins).

Evan tried early to force his way past the Sentinel, but was knocked away for his troubles. Stressing that he "needed more Strength", he managed to increase his Strength in a variety of ways; once from the Enchantress, once from a Magic Stream; once by handing in some encounter cards, etc. He landed on the Hermit who gave him his Talisman, and finally fought past the Sentinel with the help of "Psionic Blast(?)" spell that adds his Craft value to his Strength. He headed straight for the Portal of Power, got through and got lost in the Crypt, ending up at the Warlock's Cave.

His next personal mission was to "visit the Valley with the dinosaurs" (the Hidden Valley has drawings of little dinosaurs in it) and he achieved this. In the Hidden Valley, he encountered a Hobgoblin with a pet Ape (or was it an Ape with a pet Hobgoblin? We couldn't decide.) and managed to defeat them in a close battle that gave him a Gold as a reward. He was just making his way to the Portal of Power when Jojo reached the Crown space. Evan was distraught that he didn't manage to get to the Crown space as well, but he was mollified when we told him that since Jojo is now Queen, she'll make him the General in charge of all the soldiers.

Some notes from our first play: