D&D 5e [Princes of the Apocalypse] Session 12: Sigh, another side-quest? No wonder it's called the Sighing Valley!

Characters:Tempest, Blue Dragonborn Cleric Trickery-Domain (played by Jojo, 14yo)Folax Huntreouss, Human Gunslinger (played by Evan, 12yo)Serenity, Aasimar Wizard Divination-School (played by Mummy)Warning: This adventure contains a lot of references and spoilers to the ‘Princes of the Apocalypse’ campaign. If you have yet to play through the campaign, be warned that you’re likely to come across the same stuff we did.After several soul-searching days, Mummy finally decides on a name for her character! From here on, Mummy’s aasimar wizard is called ‘Serenity’; she wanted a name associated with ‘peace’ and it was also a nice tribute to the Firefly series.
I also asked the kids for a good name for the aarakocra who they rescued from Feathergale Spire, and Evan suggested ‘Kehaar’, which I thought was brilliant. Kehaar is the name of the verbally-abusive black-headed gull from the book ‘Watership Down’. I read that book to the kids some years back; if you ever wanted a kids story about anthropomorphised rabbits undergoing a survival adventure with the same level of paranoia as any decent zombie-flick, look no further! 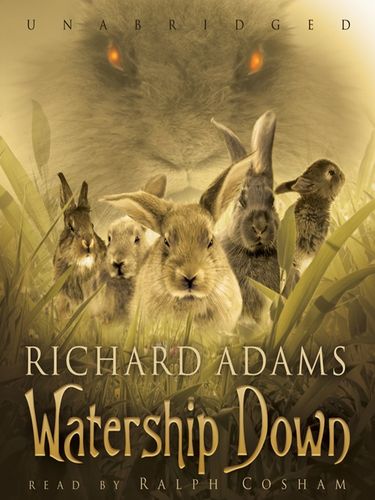 Kehaar leads the small group of adventurers southwards into the Sighing Valley. At one point, the group flies over a bunch of opportunistic gnolls armed with bows, but after Folax blasts one of them right in the eye as it was attempting to aim an arrow at them, the rest scatter yippingly into the gloomy valley floor.Eventually, they make it to Kehaar’s hideout, which looks like a series of large camouflaged nests up in the trees. There are five other aarakocra here, and after Kehaar makes introductions, the adventurers are invited to stay with them. They even find places for the hippogriff and the giant vulture to roost up in the trees.“Wait a minute, dad!” says Jojo. “How do we know that Lord Thurl can’t track us here!? Maybe he can magically track the hippogriff or the vulture - I mean, they used to belong to the Feathergale knights, right?”I flash her a rakish smile. “A tracking device? Not on this ship, sister!” 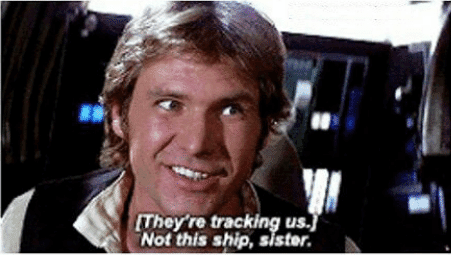 Jojo rolls her eyes, and proceeds to braid a leather collar with a spork pendant for her hippogriff. She makes another one for the giant vulture, but the brutish creature screeches menacingly at her and gulps down the collar. We conclude that the next time she tries to track the vulture, she’s either going to find it, or a pile of bird poop.“Over the next day or two, you guys hide out with the aarakocra, but there is no sign of any Feathergale knights searching for you guys. The aarakocra all speak in low, serious tones except during meal-times when they devolve into a squawking mess, bickering like seagulls over chips.” The aarakocra tell the adventurers that they are here to 'find and destroy the source of the Elemental Evil Air', and they've heard rumours of an evil Prophetess of Air leading the air cultists. Mummy reasons that this must be the person who wants her wings.The aarakocra have already scouted some parts of the Sighing Valley. So far, all they’ve discovered is Feathergale Spire (although the knights worship Yan-C-Bin, the Prince of Evil Air, the aarakocra insist that it is not the source of the evil). There’s also a griffon nest on a cliff-face to the west, where they’ve spotted a pair of mated griffons, likely guarding their nest of eggs.“Griffons are fiercely protective over their eggs,” I tell them off-handedly. “Apparently, one griffon egg can is worth almost 2000 gold!” I should have anticipated what would happen next.Evan sits up. “2000 gold? That’s a fortune! Hey, Jojo, let’s get those eggs!”Jojo says, “I’m not going to steal eggs from a griffon’s nest! If you want to go get yourself killed, go by yourself!’And so, going against all conventional wisdom, the gunslinger decides to raid the griffon’s nest all by himself. He borrows the ‘wing-suit’ from Tempest, and early the next morning while everyone’s asleep, he sneaks off and rides his vulture west towards the griffon’s nest.I tell Evan, “The craggy cave entrance to the griffon’s nest is located on the side of a cliff-face. It’s a hard climb up or down to get to it.”After some thought, Evan says, “Okay, I’m going to fly high above the nest, and then jump off the vulture. I’ll activate the wing-suit and glide down towards the entrance!” I get him to make a couple of Dexterity and Stealth rolls, and the gunslinger succeeds in gliding unnoticed to the cliff-face above the cave entrance. He cautiously pokes his head down to check, but I tell him that he sees nothing but gloom, although there’s a definite animal smell coming out from the cave.The gunslinger carefully climbs down into the cave entrance. “Some ways in, you can see a large pile of sticks and branches. You’ll have to get closer to have a look inside.” I get him to roll more Stealth rolls, and make a few mysterious rolls of my own. It always gets the kids on the edge when I do that.Folax creeps deeper into the cave, and gets right up to the pile of sticks and branches. “You peek over and see a griffon! It is currently snoozing with its legs tucked under it.”“You mean, like a cat in the loaf position?” asks Jojo. “I love it when cats do that!” 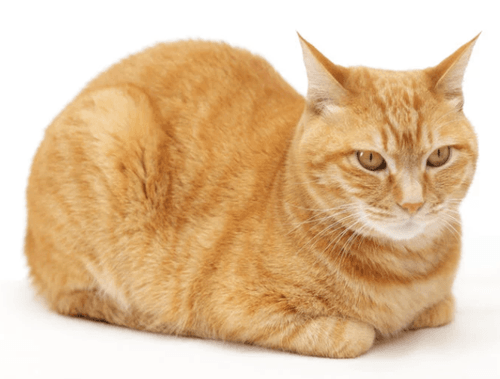 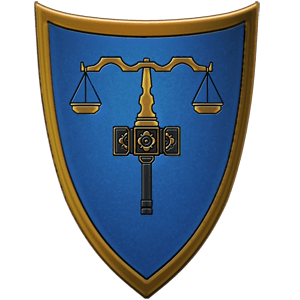 Tyr, God of Justice!Jojo and Mummy burst out laughing while Evan covers his face. “Arrgh! I’m SO DEAD!”After a while, I tell him, “You suddenly realise that you’re moving, like along a bumpy road. As you regain more wakefulness, you realise that you’re in a covered wagon, and the symbol of Tyr is painted on the canvas ceiling.” The gunslinger looks around but it hurts to move.Just then, the canvas door leading to the driver’s seat of the wagon flaps open and a woman peers in. I tell Evan that the woman is wearing full plate armour, and has a stern but fair face. She sees Folax and says, “I thought I heard you stirring back there. I am Lady Ushien Stormbanner of the Knights of Samular. And you are very lucky to be alive.”“The egg,” croaks Folax. “Do I still have the egg?”Evan blanches when I tell him 'No'. Lady Ushien looks at him critically. “Why would anyone want to take a griffon’s egg? We were trying to retrieve the saddle bags of the horse that griffon carried off, and when we got to the nest, we found you facing off two griffons at once! And then, just as the griffon was going to skewer you with its beak, there was a blinding flash! We think it must have been this thing you were holding - the griffon must have broken it when it attacked. You’re lucky that the flash blinded the griffons long enough for us to drag you and the saddle bags out of there!” And she holds up the broken remains of the Wand of Magic Missiles.Adventure Notes:I follow the very inadvisable adage while DMing of ‘when in doubt, roll a random encounter’. Sometimes it works, and sometimes it just creates more work! This session, I did not expect Folax to run off griffon egg-stealing on his own, and while I wanted to grant him a very (very) small chance of success, I also wanted to ensure that there was some twist to get him out of that mess. So while he was waiting for the female griffon to move, I rolled on the Random Encounters chart in the campaign book, and it gave me ‘Knights of Samular’. I took that as a lead, and made the male griffon turn up carrying the dead horse belonging to a knight of Samular. All in all, I’m quite happy with the way things turned out, because it gave me the opportunity to introduce another faction of the Dessarin Valley to everyone.I’d never even heard of the Knights of Samular, and I needed to do some research on them beforehand, hence why it took a couple of days before I could tell Evan what had happened to Folax. And yes, I felt it was fair to destroy the Wand of Magic Missiles as a sort of penalty instead of outright death. This time round.

Email ThisBlogThis!Share to TwitterShare to FacebookShare to Pinterest
Labels: D&D, Princes of the Apocalypse

Thanks everyone again for an awesome KKCon! I had a fantastic time, and it really gives me and Cynthia a buzz to see so many people playing games and having a great time! One might ask ‘how do you run an awesome KKCon?’. Well, I’m glad you asked, pseudo-person who sounds just like that voice in my head! Here are the fool-proof steps for doing just that!

1. Have keen friends who turn up early and leave late! 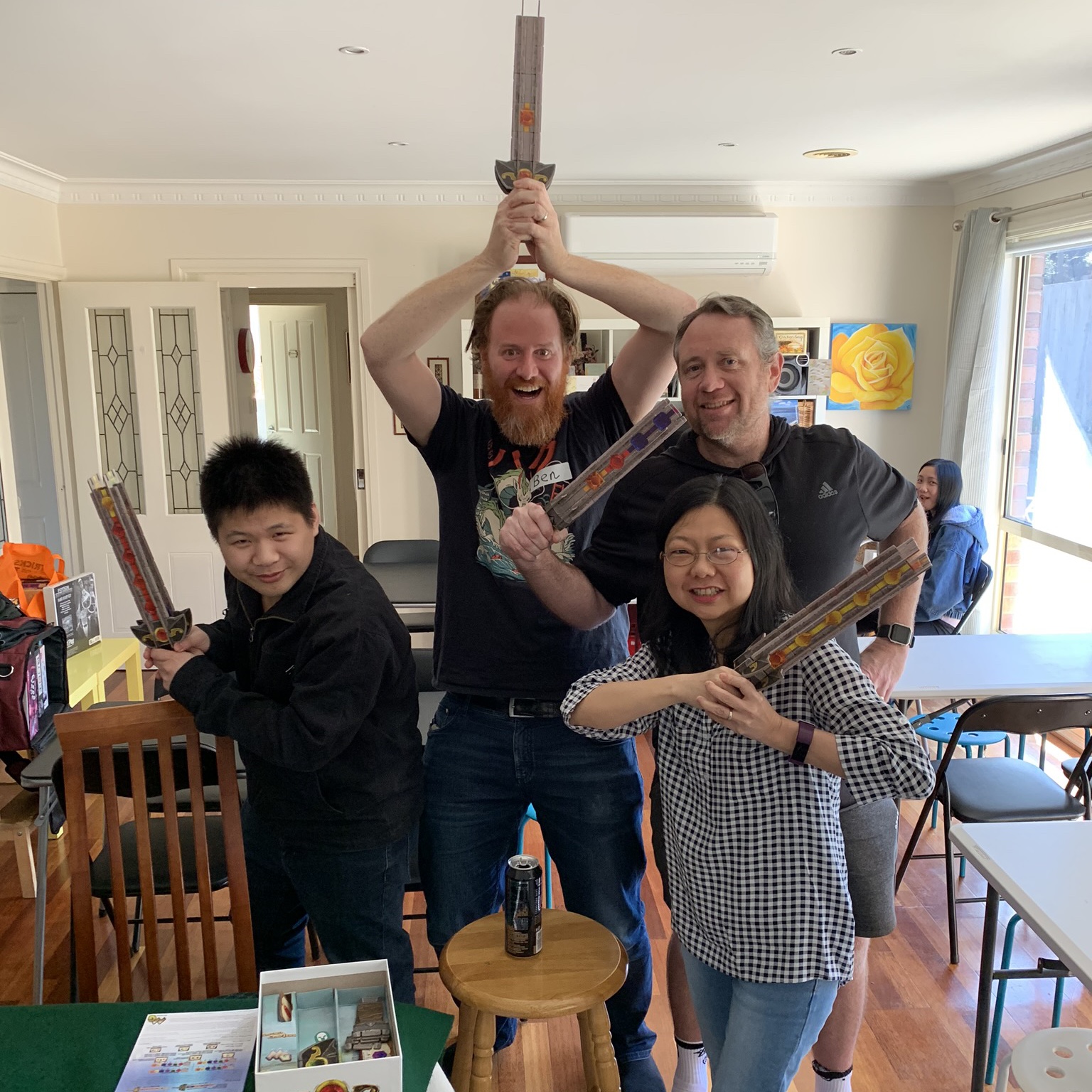 2. Have a trustworthy Raffle Guy! 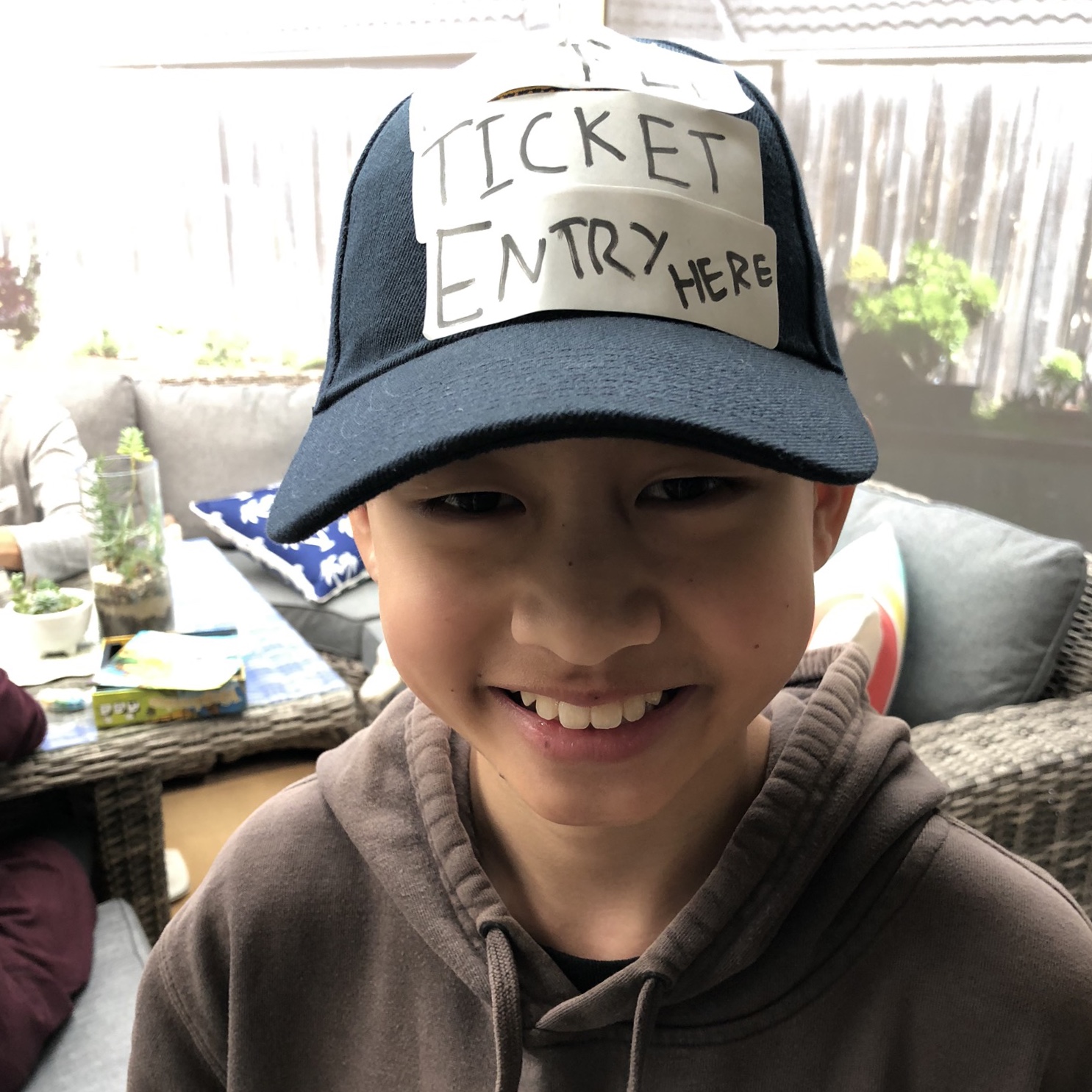 This year, I left the running of the raffle to a trustworthy Raffle Guy! Evan collected the funds, prepared tickets, ignored bribes and was generally the best Raffle Guy I’ve ever coerced into the job! Well done, boy!

3. Have a Looping Louie “Doubles” Tournament! 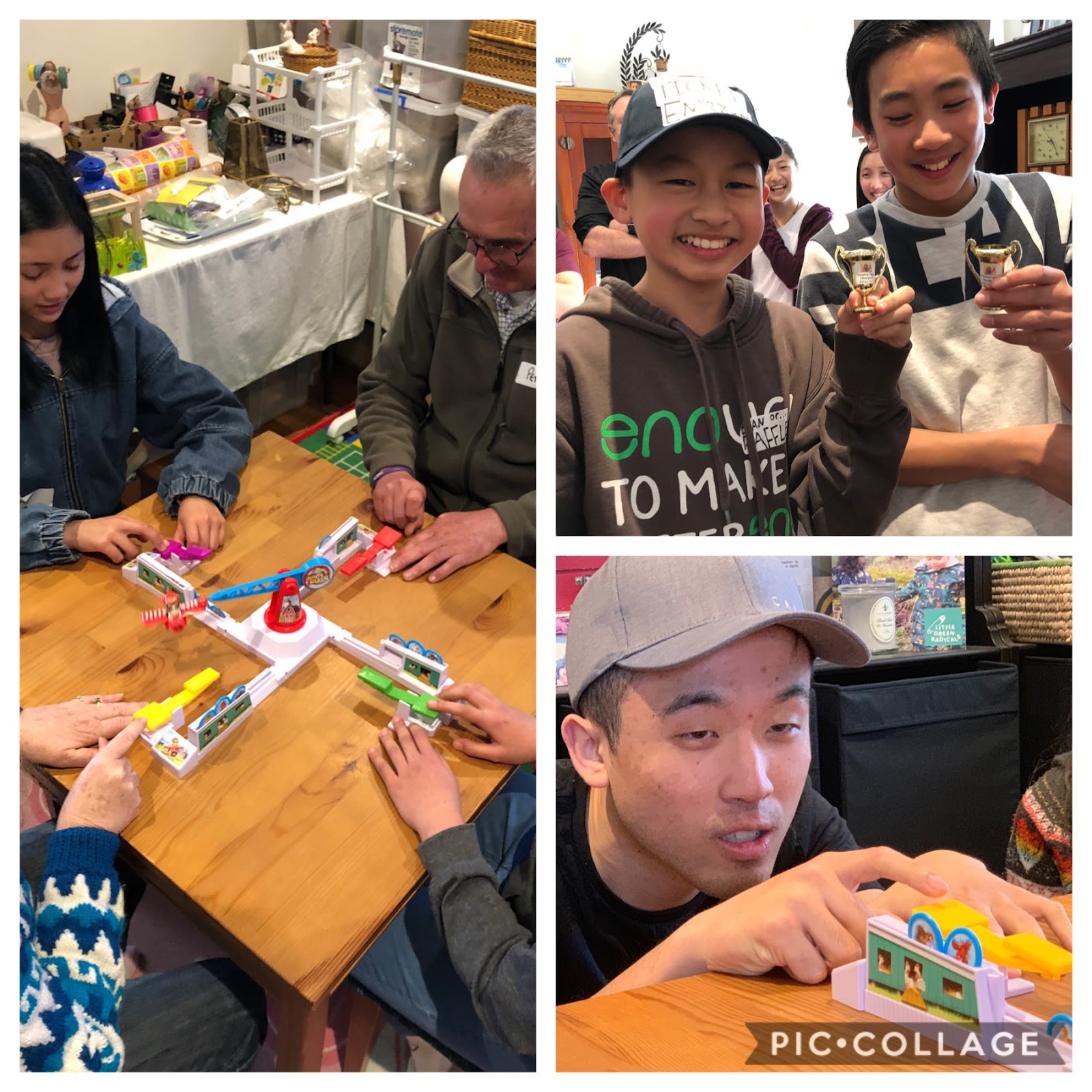 This was the highlight of the day for me! Looping Louie “Doubles” was an idea which came up a couple of years ago, and I wasn’t sure how well it would work. Needless to say, it was AMAZING! I had such a buzz from seeing everyone really getting into the tournament. Congratulations to Evan and Jonathan who won the tournament this year! That “back-slash” move that they came up with is truly fearsome! And thanks to my beautiful Jojo who organised the matches! Great work, girl!

4. Have an awesome game-themed cake! 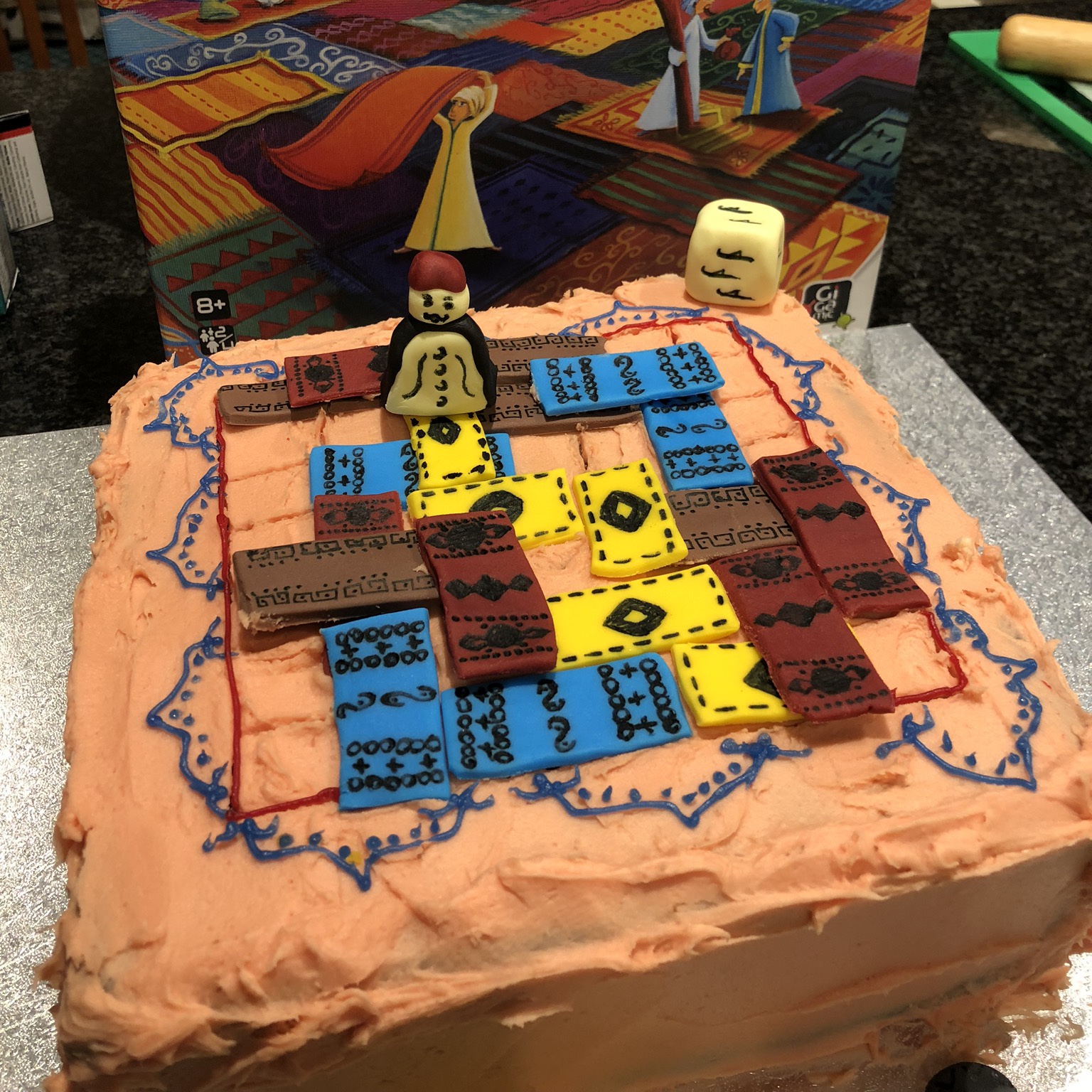 The cake this year was based off “Marrakech”, which is a board game about earning money by building carpets. It starts off docile enough, but by the last few turns, it becomes a pretty cut-throat affair as players lay down their carpets to cover up other carpets. I must say that this is the only game I know that uses bits of felt carpets as a game mechanic - and it works!

As mentioned during my speech, the game has some special significance to Cynthia and me. Early in the year, Cynthia had a rough start with her vision impairment, and for a couple of months, we didn’t feel like playing any games. But after her eyesight recovered well enough to recognise colours, I picked up this colourful game as this first game to play! 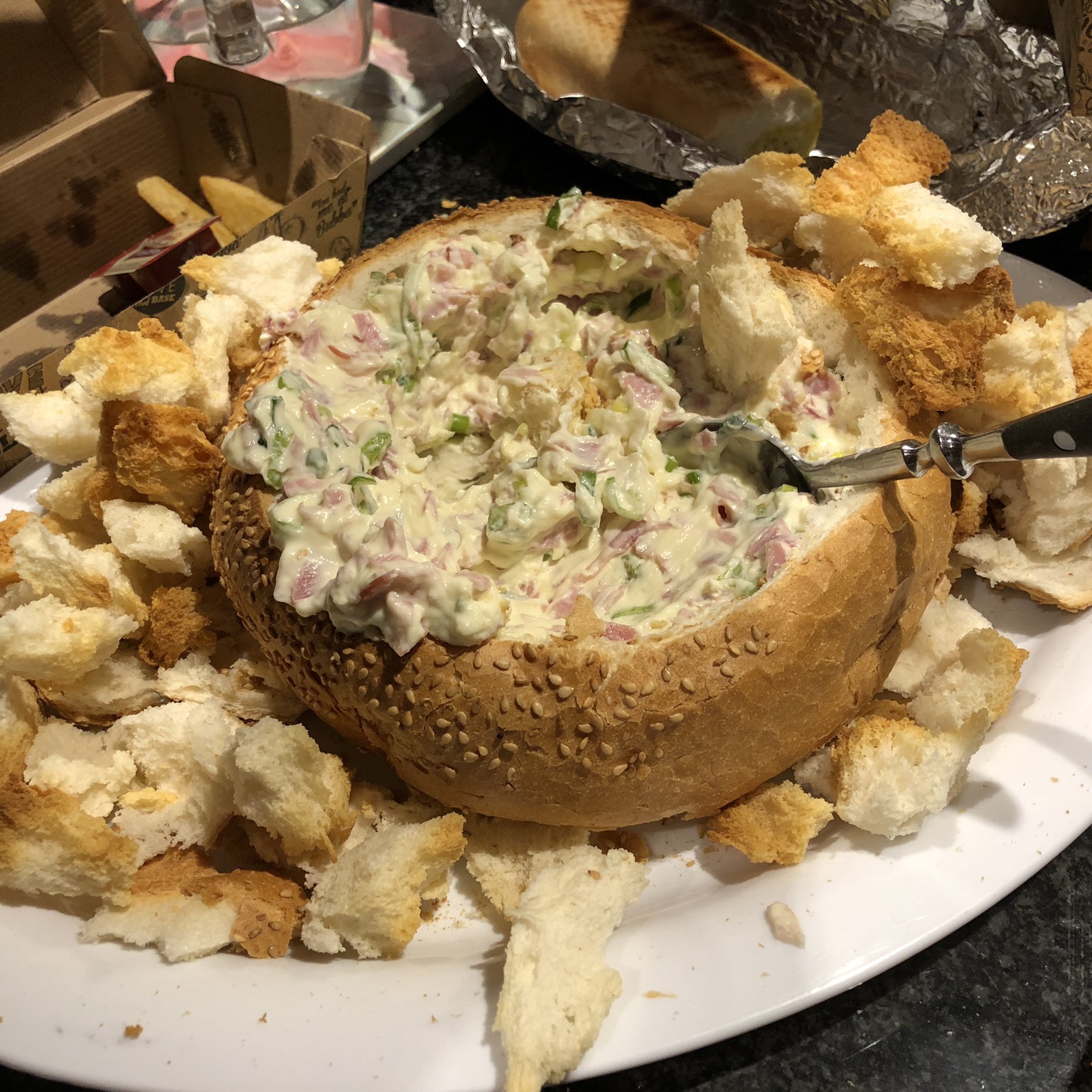 This is essential. Apparently, a portion of attendees were there strictly for Maureen’s Party Cob, which was (as expected) made to perfection! Thanks Maureen for preparing not one, but two cobs for the con!

6. Have a good cause to donate Raffle money to! 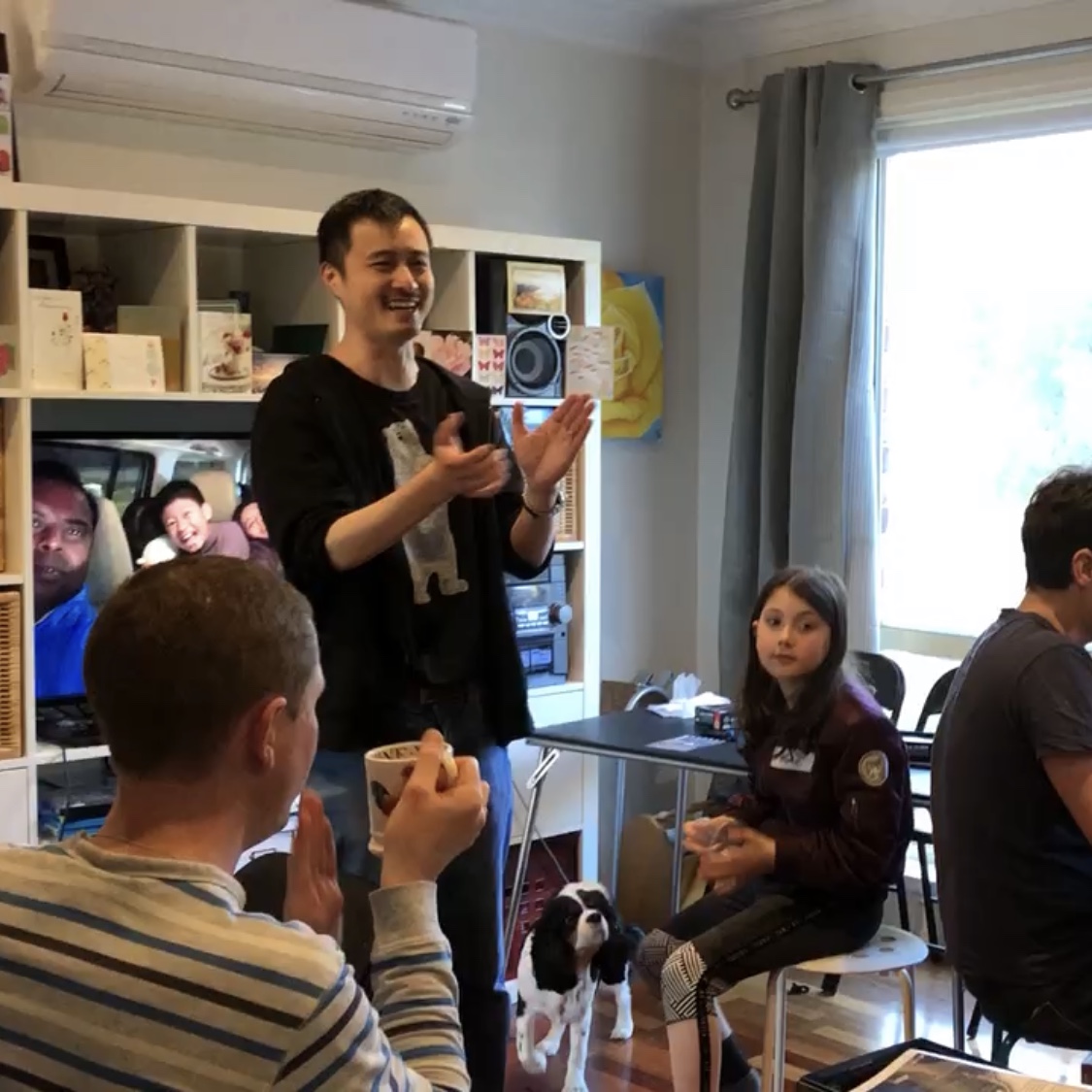 Contrary to popular belief, the money raised in the KKCon raffle does not go to the ‘KK Board Game Fund’! We’ve been supporting our charity partner for years, and this year, we were pleased to tell them that we raised $871.05! I believe this beats last year ($800), so many thanks to everyone’s generosity!

7. Have a cool Fridge Magnet Gift! 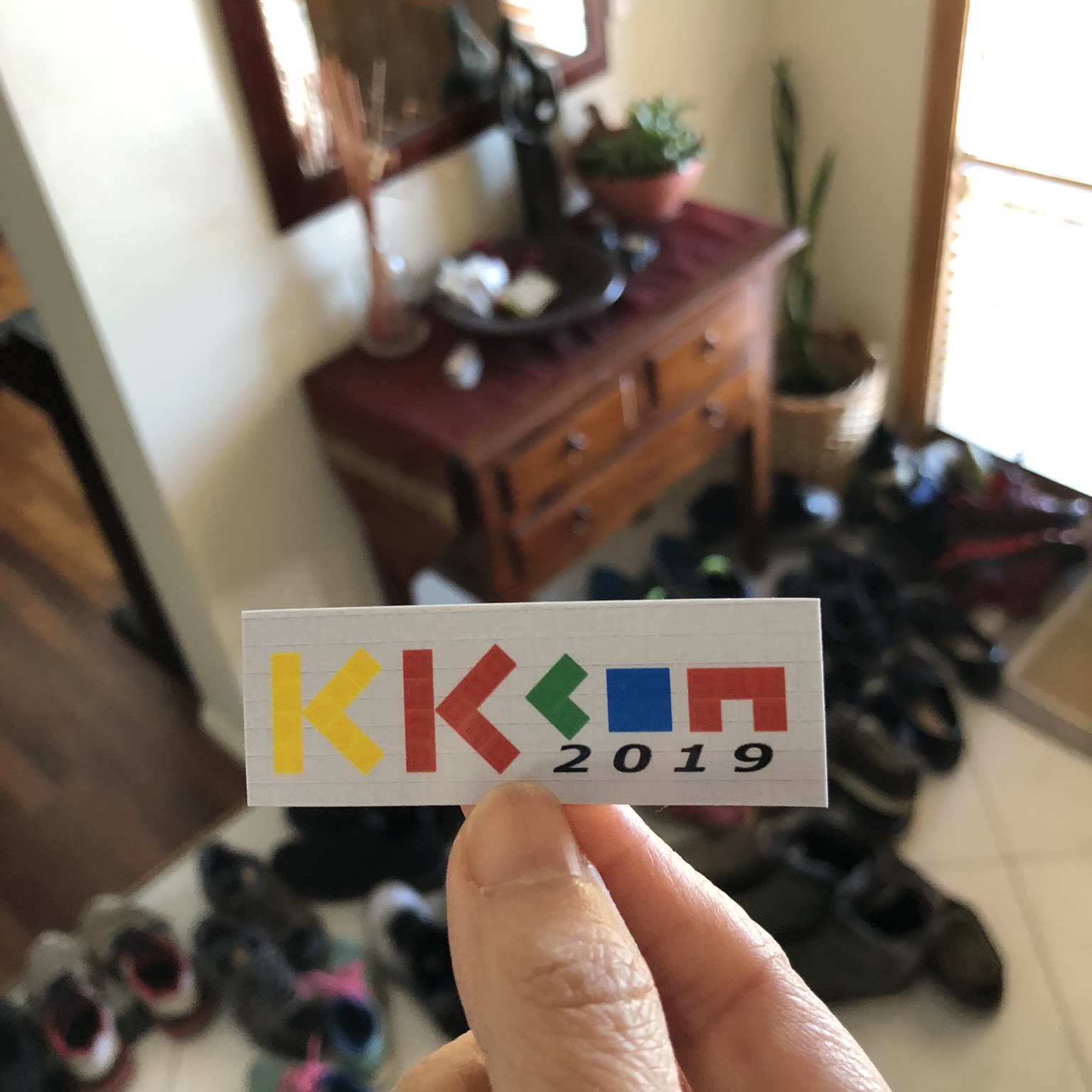 This year’s door gift is based off Blokus, which seems to be a big hit amongst the board gamers at work. So much so that it apparently takes about 45 mins to play now because everyone is busy calculating and re-calculating their best moves. Fast to learn, slow to master - and there seems to be more masters of this game at work nowadays! 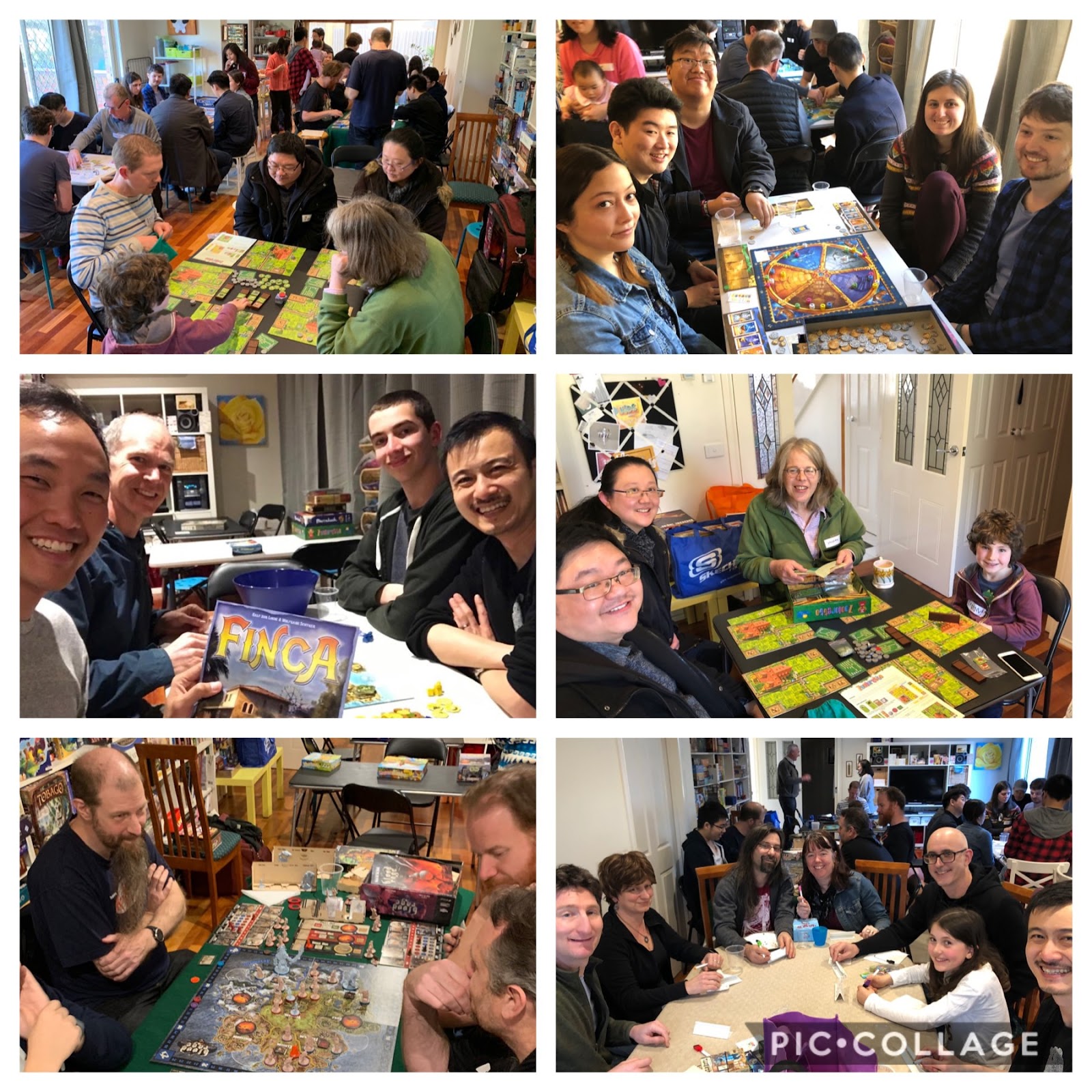 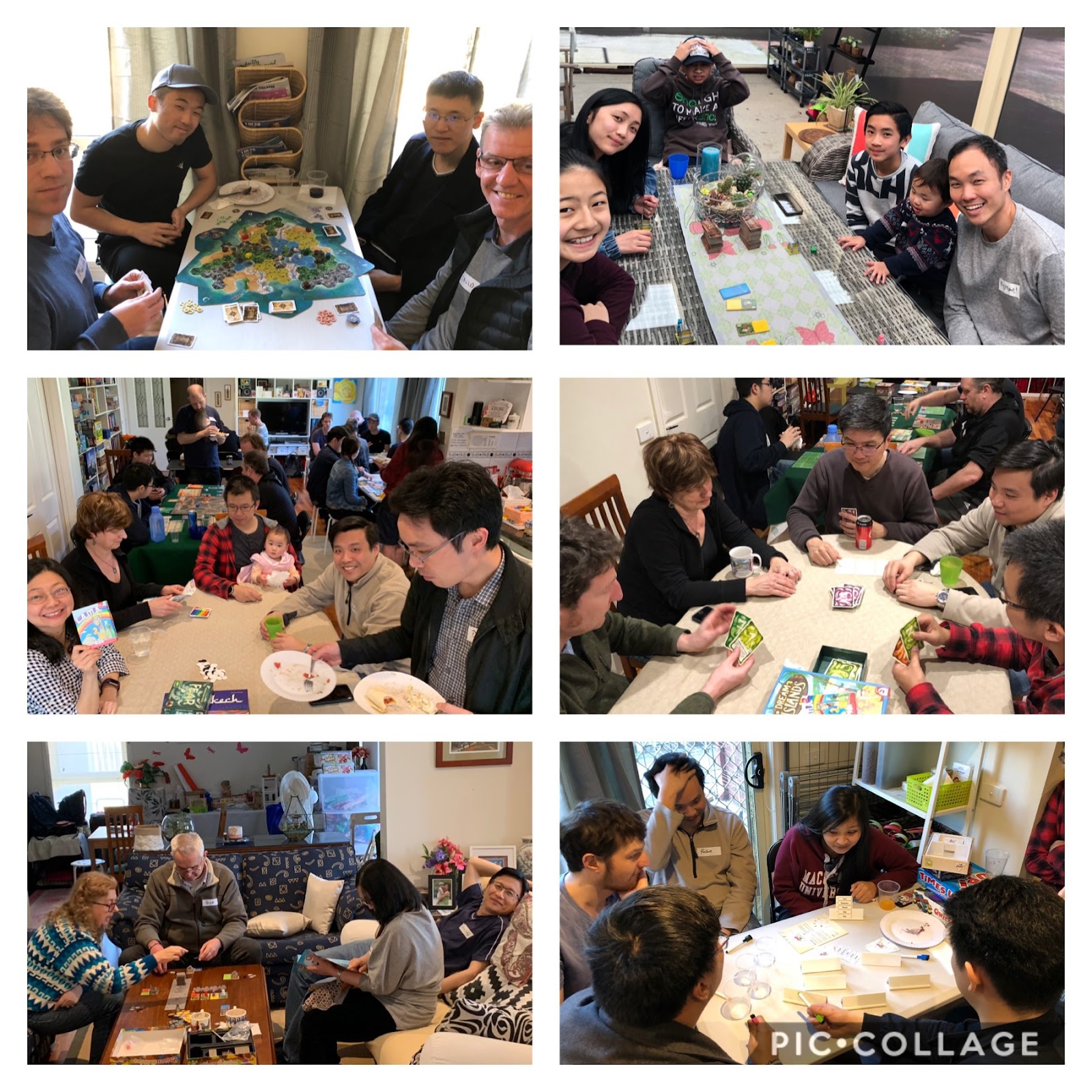 Surely it makes sense that if a gaming con is only as great as its attendees, then an AWESOME gaming con must have AWESOME attendees! Thank you all for being awesome attendees to KKCon this year!