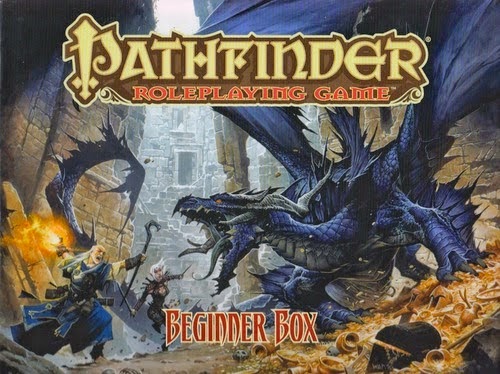 Warning: This adventure contains a lot of references and spoilers to the Black Fang dungeon. If you have yet to play through the dungeon, be warned that you’re likely to come across the same stuff we did.

With no real option other than to perform the “Retrieve the Dragon Toy” quest for Fatmouth the Goblin King, the adventurers leave the Goblin King’s lair back the way they entered. King Fatmouth graciously provides the adventurers with two goblin escorts to lead the way to where they last saw King Fatmouth’s sister with the dragon toy. However, the goblin escorts do not go very far - they come to the magic fountain chamber, point and gibber fearfully at a pair of double-doors on the eastern wall before fleeing back to their lair.

“That’s it?” snorts Evan. He pushes against the double-doors and leads the way in.

I read out from the GM Guide. “The door silently swings open to reveal a chamber bathed in red light. On the east side of the room, a pair of stone statues stand on either side of a dusty altar that is inscribed with runes. Atop the altar sits a large red gemstone. The creepy red light comes from this gemstone.” ﻿﻿

Nothing like some sweet loot to encourage some adventurer action. When the kids decide to approach the altar, I say “As you take one step towards the two statues, loud voices boom out from them.” I attempt to produce two voices at the same time, and end up with, “Ap-Ap proach-proach with-with humili-lity-ty... and-and live-live!”

Jojo giggles. “Those statues sound out of sync, dad!”

“It’s been over a hundred years since anyone else has come here,” I say defensively. “These things probably haven’t been serviced in a long time.” I boom out the warning again, emphasising the clue. “Ap-Ap proach-proach with-with HUMILITY... and-and live-live!” It was unintentional, but the voices sound remarkably like the evil villain Chester V from ‘Cloudy with a Chance of Meatballs 2’.
﻿﻿
“What does ‘Humility’ mean?” asks Evan. “Is that like, humble and stuff?”

Nearby, Mom looks up from the computer, and the kids fill her in on the situation. I expect her to figure it out straight away, but to my hidden astonishment, the riddle has her stumped as well. I throw in another clue - “Humble, as in.. a Penitent man?” But even that just draws blank looks. I can see that a mandatory viewing of ‘Indiana Jones and the Last Crusade’ some time in the future is required.

And so, the kids decide that it is best to approach the altar from different sides, just in case the statues spring to life and attack. When Lexi and Sharpblade get close to the altar, I tell them, “Suddenly, the fire above the statues’ hands flares up, and a sheet of flame about waist high blasts the both of you!”

Lexi succeeds in her Reflex saving throw, and makes a spectacular backward flip that lands her right outside the blast zone unscathed. I tell you, that rogue’s “Evasion” class feature has saved her bacon so many times, it is almost game breaking! Sharpblade, on the other hand, catches a face-full of fire which chars his skull into a black visage. He too hastily retreats back to the entrance side of the room.

I decide to drop one more hint, and gesture with my hands for added emphasis. “Sharpblade’s TOP-HALF of his armour looks pretty badly burnt! The LOWER-PART of him looks okay though.”

The kids finally get it. “Ooohhhh!” They make a second attempt towards the altar, this time crawling on their hands and knees. “Once you get close, the statues blast their flames again, but it all passes overhead leaving you both unharmed!” Sharpblade reaches the altar first and takes the large ruby on it. I tell him that it obviously has some magical properties, but he cannot work out what it is. He puts it into his backpack with the intention of getting it identified back in Sandpoint.

“Well, there’s no sign of King Fatmouth’s sister here, or any dragon toy. There’s another door to the south though.” The adventurers open the door, and I describe the dark room to them which is festooned with spider webs.
﻿
By now, the kids are pretty unfazed by giant spiders, so they quite confidently enter and search the room. They find the goblin corpse of King Fatmouth’s sister, and retrieve the dragon toy from her dead grasp. Even when I announce that a Giant Spider bursts out from hiding and swipes at Lexi, the kids are quite nonchalant about it and start making their way back towards the exit.

“Wait, you guys aren't even going to kill this thing?” I ask, somewhat surprised.

The angry, territorial spider makes a few ineffectual swipes at the retreating adventurers before scurrying back to its lair once they reach the altar room.

Adventure Notes:
Hmm.. I should have put a few more spiders in there. Maybe a bigger one like that large Grey. Territorial, sheesh.

King Fatmouth is overjoyed to have his toy dragon back, and enthusiastically yanks its tail several times to watch its wings flap. “Haha! King Fatmouth very happy with dragon toy!”

“The goblin king nods happily at you two and says, ‘Yes, yes - you can go!’ You both head towards the exit to the north, and are just about to start climbing up towards it when you hear the goblin king slyly call out, ‘Go kill Black Fang, yes? Oh, very, very hard to kill Black Fang… if you do not have Magic Dragon-Killing Sword!’”

The two adventurers cease their climb and turn around. “What magic dragon-killing sword?” asks Sharpblade curiously.

I tell the kids, “The goblin king can hardly hide his gleeful smile. ‘Why, the Magic Dragon-Killing Sword in nearby lake! It so powerful, it can pierce hide of Black Fang!”

“But, dad, we’ve already got a magic arrow!” points out Evan. “Why do we need a magic sword?”

“Yes,” I agree. “That arrow should do quite a lot of damage to a dragon like Black Fang. But what if… you miss?”

Jojo sighs. “Okay, so where is this lake?”

King Fatmouth once again graciously provides two goblins to lead the adventurers to where the underground lake is. This time, the goblins lead them halfway down an eastern tunnel before gesturing and gibbering fearfully towards the end of the tunnel and fleeing back to their lair. “At the end of the tunnel, you both enter a large chamber that mostly contains an underground lake. In the gloomy darkness, you can see an island in the middle of the lake.”
﻿
“That’s no problem for me,” says Evan. “I’ll just walk underwater until I get to the island!”

And so, the skeleton warrior walks straight into the dark waters. Lexi hesitates a bit, but decides to swim after him. Pseudo opts to fly up to the ceiling and watch out for danger. Lexi and Sharpblade both get to the island without incident.

“You see bones of goblins and other things scattered everywhere on this island. Searching through the junk, you find a couple of strange potions, a pouch containing 175 gold, and an elaborate-looking longsword!” Evan and Jojo decide that Sharpblade should carry the ‘dragon-killing sword’ and in return, Sharpblade gives Lexi the arrow of dragon-slaying.

“Sharpblade starts heading back to shore, and Lexi swims after him. However, just as Lexi reaches deeper water, she sees something swimming in the water towards her!”

“Is it a Reefclaw!?” asks Evan excitedly. The boy is still keen on seeing a Reefclaw ever since spotting it in the GM Guide.

“Yay, I think,” says Jojo uneasily.
﻿
The reefclaw swims with frightening speed underwater, and reaches the swimming elf in no time. Lexi tries to fend it off with her rapier, but the monster easily avoids her blade and hits her with a claw attack. “Oh, you know what? This reefclaw has a ‘Grab’ special ability! It clamps its claw around Lexi’s waist, and pulls her underwater!”

Adventure Notes:
The Black Fang adventure module has strict instructions to only attack the adventurers when they step on the island, and to stick to land attacks. I think it’s probably to lessen the difficulty of the encounter. With my kids’ character levels, I doubt I need to be so careful.

The elven rogue tries again to strike at the reefclaw, but somehow misses badly. “Dad, am I drowning?” asks Jojo.

“Well, you can hold your breath for a number of rounds, and then you start drowning.”

Evan strikes a pointer-finger pose with both hands. “Oh yeah! Here I come!” Sharpblade saunters back towards the reefclaw while humming a funky tune. He draws his warhammer at the last instant and smashes the reefclaw on its back.

I check the damage and its remaining hitpoints. Ooo, that smash hurt. “The creature emits a bubbly roar, and lets go of Lexi! It swims off into the murky waters.” The two adventurers stagger out onto shore, and after a short rest, they make their way back to the lair of King Fatmouth.

“At first, the goblin king looks surprised to see you two, but then recovers quickly. ‘Ah! So you both survive the reefclaw! And you have dragon-killing sword! That very-very good!”

“You could have told us about the reefclaw,” says Jojo darkly.

The goblin king brushes that aside. “No problem for strong adventurers like you, yes? Now you go kill Black Fang, yes? One tip.” He lowers his voice conspiratorially. “Hit underbelly! Black Fang have soft underbelly!”

So armed with their new dragon-slaying weapon, and a special tip, the two adventurers climb up towards the northern exit. Just as they leave, I relate the following to the kids:

“King Fatmouth waves goodbye to you both, and just as you are out of sight, another goblin hisses angrily into the king’s ear. ‘Why you let them go!? They have magic dragon-killing sword! Why we not kill them and take sword and all their treasure!?’ The goblin king grins evilly. ‘It very simple. Black Fang can kill them for us! If Black Fang kills them, we sneak in and take all their treasure! And if they get rid of Black Fang, we kill them when they come back through here!’ The goblins laugh at their king’s evil scheme.”

“Little do the goblins realise is that Pseudo has been listening to them from above. The little dragon wings its way to you to tell you guys what he just overheard!”

Adventure Notes:
I really enjoyed how much King Fatmouth and his goblins worked as a story-angle instead of just monster fodder in our adventure. At this point, I had honestly no idea how the kids were going to get out alive (or without killing A LOT of goblins), but I was sure some solution would present itself eventually.

Plot hooks: Onward to Black Fang’s lair!
Posted by KK Su at 4:41 AM