Cynthia Reviews: ...and then, we held hands. 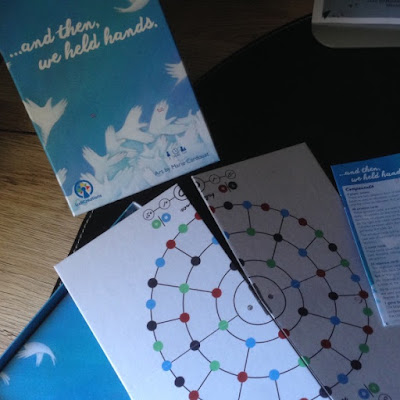 With such a sweet title that appeals to couples like my hubby and me, we bought the abstract strategy card game recently when we went shopping for games. I was impressed by the backstory. Designed by David Chircop and Yannick Massa, this quirky card game was first created as a free ‘Print and Play’ game. It got so popular that it won the 2014 best ‘Print and Play’ winner as nominated by fans on BoardGameGeek.

After being picked up by a game publisher, Ludicreations, the card game is now available on all major game stores and online. We tore off the shrink-wrap and noticed that the artwork looked rather like ‘Dixit’. French illustrator Marie Cardouat beautifully depicted the cards which each represent an emotion; happy, sad, ambivalent, calm, angry, manic, cold, resigned, content, betrayed, carefree, euphoric, enraged, depressed. 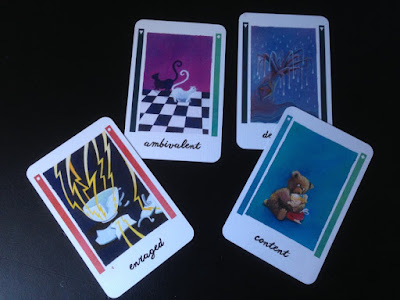 "...and then, we held hands" is a co-operative two-player game about finding balance. To win, players must complete objectives and reach the centre of the board. Each player takes a turn to fulfil the common emotional objective by discarding emotive cards to move from node to node. Players can use their own cards or their partner’s to complete an emotional objective. But if either player cannot move, the players lose and the game ends immediately.

We ditched the no-talking rule and converse for fun to display our emotions. We avoided suggesting any moves to each other though. In reality, we rarely argue as a couple. In this game, we were two angry people always arguing. We tried to make each other happy, but we just end up arguing and giving each other the cold treatment. We played the ‘Arguments Variant’ where we needed to resolve an argument by ending on the same node together. That was difficult to do in the game. Just when we resolved one argument, another one pops up and we are once again trying to resolve it.

We definitely would recommend this game to couples. The game theme depicts that relationships are hard work but when you do find the balance and compromise, both are happy when there is reconciliation.
Posted by KK Su at 11:23 PM

Email ThisBlogThis!Share to TwitterShare to FacebookShare to Pinterest
Labels: and then we held hands, Cynthia, Review