Travels, Games and Airport Security. Or how many games can you stuff into a Codenames box?

I’m going through the X-ray check-point just before the boarding gate when I hear the dreaded words that no passenger wants to hear.

“Excuse me, is this your backpack? Could you please step aside?”

“Sure, mate.” Okay, just smile and keep casual while frantically running through the mental inventory of what I packed into there. Oh God, I did not put the nail-clippers in there, did I? That’s an embarrassing rookie air-traveller mistake.

“Something came up in the X-ray,” explains the officer with my backpack. “Let me just have a look through, okay?” He’s nicer than most airport security personnel I’ve met so far. In fact, this whole country is filled with the nicest people in the world, almost as if the colonial powers back in the day had migrated all the nice people here and left all the grumpy ones back in the old country.

After a brief rummage (which fortunately was nail-clipper-less), he finally pulls out a box. “Can I open this?” he asks.

I stare at it. “Sure thing.” It’s Codenames. Why on earth would Codenames set off the X-ray machine?

My wife is upstairs packing to go on our holiday to New Zealand. The flight is in the wee hours of the next morning, and we’re throwing things into bags the night before. You know how some people start packing days in advance of a holiday, just putting in a few things, and then more things later? Yeah, we’re not like that.

I’m at the games collection, staring at the shelves of games, trying to figure out what would make it into the travel bag this time. This holiday, we’ll be travelling with my brother-in-law, his wife and my 20-something-year-old nephew, so it’ll have to be something that caters for non-gamers (my brother-in-law and said wife) and something for a casual “Magic: The Gathering” player (my nephew). And it had to be something small - we were cramming everyone and everything into a people-mover when we get to New Zealand, so it’s carry-on bags and backpacks for everyone.

I pull out Codenames. Yeah, this will go well with my brother-in-law. He loves party or group games, and we introduced him to Reverse Charades last time, which was a hoot. I then get the idea that perhaps I could empty out the Codenames box, and then put in just 25 Clue Cards, the placards, and a couple of Key cards. That should be good for a couple of rounds of Codenames, which is realistically what we’ll play in at least one night during the trip. And it leaves room for more games that I can pack in the same box. I start searching for what else can go in there.

A text message dings. I glance at my phone. It’s my nephew saying that his mom and dad have already finished packing - they started a few days ago.

“The X-ray picked up a round metal object,” says the officer as he pries open the Codenames box. “Do you know what it might be?” 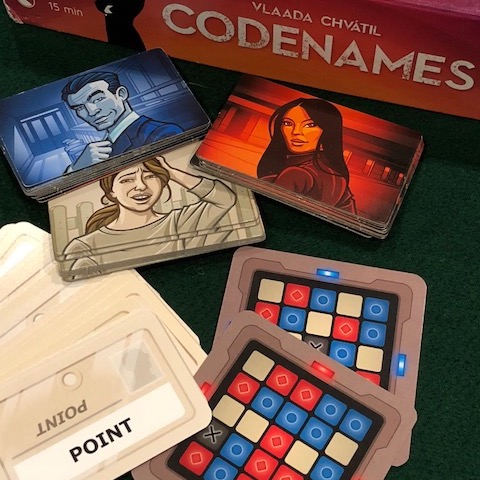 As expected, Codenames was well-received by my brother-in-law’s family. This game gets better as players on opposing teams give “less-than-helpful” suggestions on what the mysterious one-word-one-number Clues pertain to. I’ve never had a problem introducing this game to non-gamers, and it has firmly remained in our collection as a favourite.

As Clue-Giver, my poor sister-in-law misread “Wombat” as “Worm bat”, which caused much confusion to her Guessers, and much hilarity afterwards when discovered. Two thumbs up, and buy that Czech a drink for designing a game that feels like it should have been made decades ago, yet polished enough to stand against a lot of modern designs.

Taking just 25 double-sided Clue Cards, 2 Clue Giver cards and a few placards, Codenames is a breeze to travel with, if you expect to only get a couple of plays out of it. I’ll definitely be bringing this out on more family trips.

I’ve not gotten Codenames Duet on the table yet, but my interest has risen after a good friend informed me that Codenames Duet can be played well with two TEAMS as opposed to only two players. And it reduces downtime as both teams are trying to come up with good Clues at the same time. Definitely looking forward to giving this a go. 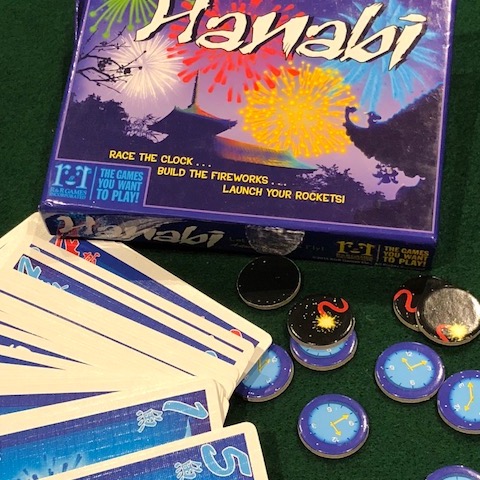 I explain to my nephew that Hanabi is a challenging co-operative game where 25 points is the maximum you can score, and that we’ve always only scored around 20. Of course, once I’ve told him that, we proceed to play a two-player game, and score 25 points straight up.

I suppose it’s easier with two players in some ways, as there’s less chance for someone to screw up, but I think we were really lucky on how some of those cards came out. And I’ve noticed that I’ve become less risk-averse with my guesses; risking a wrong guess when there’s a few ‘Fuse’ tokens left is usually worth it.

We don’t play this enough at home as a family, even though this is a great co-op game, and we’ve video-reviewed this game in the past. Perhaps getting the deluxe set with the tiles would help, but then it wouldn’t be as portable as the card game, would it? :-p

3. Castles of Burgundy: The Card Game 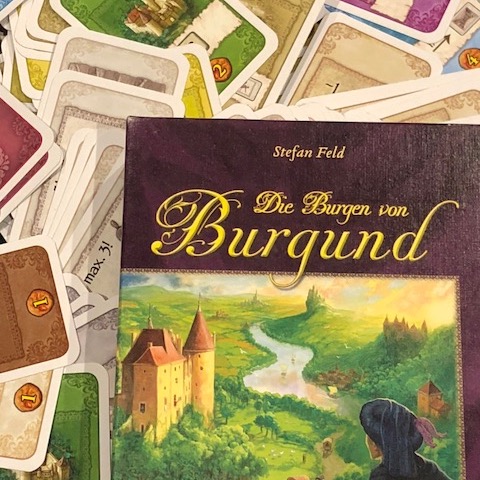 Our "Castles of Burgundy: The Card Game" set has travelled with us all over the South-East Asia-Australasia region. It’s my wife and my favourite game when we want a quick strategy game, and it’s just a bunch of small cards, so it’s easy to zip-lock into a sandwich bag and stuff into the Codenames box.

Once laid out on the table though, this game starts to sprawl. We manage to keep it to a manageable size, but this is definitely not something you’d play on an airplane table.

I taught my nephew and brother-in-law how to play, and we got a few games of this in. The card-play and action-chaining came second-nature to my nephew, who managed to “beat the master” and win on the last game we played by 1 point.

Another excellent game from our favourite designer Stefan Feld. 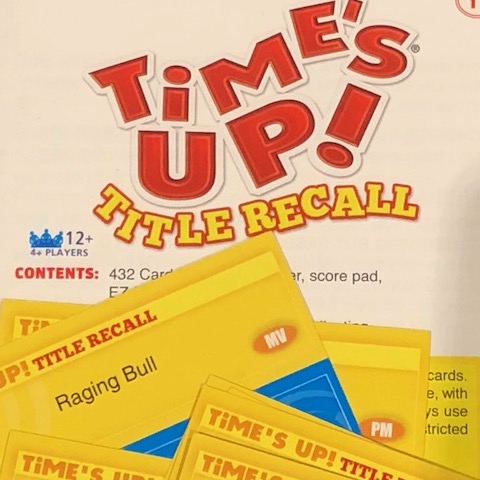 As you might know, "Times Up! Title Recall" makes a regular appearance at game conventions, usually in the late hours of the night as gamers in varying degrees of frazzility try to come up with ways to explain phrases or words to their partners with waning neurons.

The game innocently starts off in Round One as a Taboo-type game, allowing the Explainer to use words and actions to describe the answer, as long as they don’t actually quote the answer. And then in Round Two, it gets harder as the Explainer is limited to just a single word. And then in Round Three, it gets even harder as the Explainer is limited to just actions. The beauty of this is that the same Answer cards are used in all three rounds, thus challenging your memory as you try to recall answers from the previous rounds to justify why your Explainer is suddenly capering around like a chimpanzee.

Of course, with gamer kids, this was bound to happen:

For two games of Times Up and a glorious evening of hilarity, you only need 40 cards and an hourglass timer. Easy to squeeze into the Codenames box, although it is now hard to erase Evan’s facial expression of Kylo Ren from my memory. 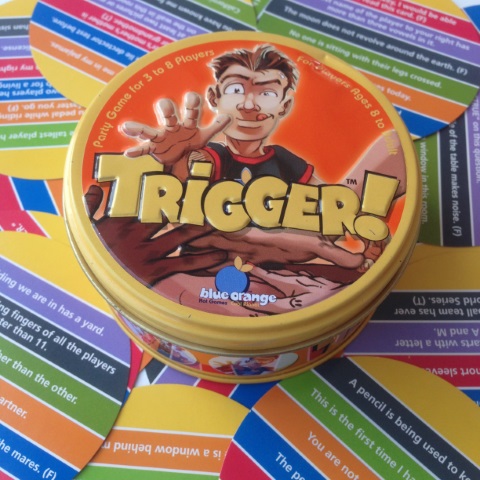 The security officer takes out the offending round metal box which had obviously set off the X-ray. He cautiously opens it and asks, “What is it?”

I start to answer. Trigger is a party game for three-or-more players where one player reads out a Yes/No/True/False question and everyone else slaps their right hand (to answer Yes/True) or left hand (to answer No/False) on the foam “Target” in the middle of the table, forming a “hand stack”. The questions are tricky and cute, like “The person on your right is not a woman.”. The scoring rules in my edition aren’t that great, but if you go to the BGG game page, you’ll find rules for a far better scoring system where players score positive points for correct answers, or negative points for incorrect answers depending on the position of their hand in the “hand stack”, i.e. the top hand gets 1/-1 point for a correct/incorrect answer, and then the next hand below gets 2/-2 points for a correct/incorrect answer, and then the next hand below that gets 3/-3 points, etc. Great game for kids and groups; it rewards quick thinking and quicker reflexes. Like, my daughter Jojo is so fast in this game, it goes beyond normal physics and right into the quantum realm - the instant I observe that her hand’s not there, it is.

“Uh huh.” The officer places it back into the Codenames box and closes the lid.

I head towards my waiting family. Friendly guy, really. This whole country is full of them.

What would you squeeze into a Codenames box?
Posted by KK Su at 9:22 PM