Fight like a 6yo Girl - The Trail of Evil (Adventure 2) 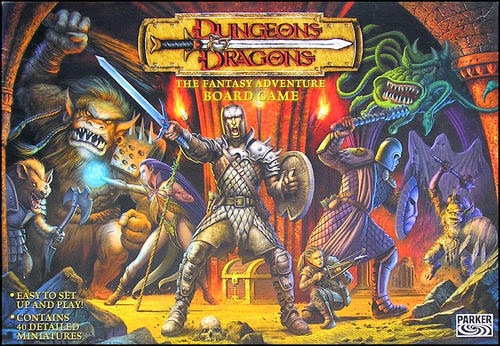 It was a public holiday but I was woken up at 7am by an excited Jojo who had somehow climbed over my head and was staring straight down into my face. "Let's play that adventure game, dad!" were her first words of the day.

And so it begins.

Trap. Trap. Treasure. Trap. Trap. Treasure (Trapped). Trap.
After breakfast, I setup the second adventure and explain the situation to Jojo. The game didn't mention how the adventurers got there, so I took the liberty to embellish a little. "It took most of the day to look for the goblin's Big Hideout, but Lidda finally spots four goblins..." I trot out four green goblins off the side of the board. "...coming out from under a waterfall. After they'd passed, Mialee and Lidda creep through the waterfall, and find a hidden cave with a door!"

10.0 points on the Bleeding Obvious Plot Hook Scale; my players from my previous RPG campaign would have rolled their eyes at this point. But the great thing with a 6-year-old is that Jojo doesn't care and is enjoying every bit of it. Opening the door, Lidda and Mialee find a long hallway with 4 tempting treasure chests in it. Despite my subtle warnings about unguarded treasure, Jojo moves Lidda in and walks straight into a Pit Trap. After reminding her about the Find Traps ability, she rolls and finds all but the last three Traps in the room. They loot the treasure chests (triggering off a Blinding Flash Trap from one of the chests in the process) and after dusting themselves off, they open the next door.

Anyone bring the BBQ sauce?
Opening the second door reveals the corridor that loops round the perimeter of the final room like a jogging track. Here, I place 4 goblins on the other side of the board, marching clockwise around the track with a 'One-Two! One-Two!'. Unfortunately, the goblins have first Initiative, and the first goblin rounds the bend and spots the two adventurers peeping through the door. With a "Hey! Who're you?!" the goblin charges down towards them.

At this point, Mialee casts her most potent spell that she'd picked up recently - Flame Arrow. Jojo rolls maximum damage with the dice, and whoops out a "Yes!".
"Mialee shoots arrows of fire at the goblin, and he is totally covered with flames! Gaaahhhh, he's now all black and topples over! You've barbequed him, Jo!"

While Jojo is laughing, the second goblin comes up ("Smells great! What's cooking? Aarrgh, intruders!!") and Lidda branishes her newly-found Bone Cleaver. She rolls enough damage to take out the goblin, but breaks the Bone Cleaver in the process. ("Hey! Where's my legs? Urrgghhh..") She pulls out a Hammer of Liberty to replace the Bone Cleaver. The last two goblins charge down towards them, and after several rounds of hits being exchanged, another goblin succumbs to the adventurers.

After witnessing the brutal ends of his fellow goblins, the last remaining goblin chickens out (DM poetic licence kicking in) and runs back to the final room shouting, "Help! Help! They're here! They're here!" He bursts through the door, and inside the final room, we see another goblin next to a big, mean-looking bugbear.
"What's a bugbear, dad?"
Goblinoid crossbreed. "Uh, it's like a goblin. Mixed with a bear. And possibly a bug."

The bugbear is very annoyed over the intrusion. "Grrraaahhh!! I'll smash them!! I'll stomp them!!" He turns to the goblin next to him. "You go first!" In the midst of "What? Why me?" the goblin moves out the door to see Mialee coming around the corner. "Attack!" The injured goblin cowers in a corner of the final room, while the bugbear comes out the door and stands there, not knowing that Lidda is coming around the other corner behind him.

Sneak Attack 101
With Lidda using the Hammer, I decide that now was the best time to mention Sneak Attacks. "Hmm.. Lidda is very clever. Not only can she Find Traps, she can also Sneak through someone to get behind them. And if she tries to hit them in the same turn, she gets an extra Sword in her roll!"
"Oh! How can I do that?"
"Well, you just move next to him and say, 'SNEAK!' while moving through him."
"1..2..3.. SNEAK!"
Lidda manages to score a hit through the bugbear's thick AC 2.
"Great work! Lidda rolls under the Big Bad Guy's legs to come up behind him and.."
"No, dad! She jumps over his head, and turns round and round.."
"You mean, somersaults?"
"Yeah! Lidda summer-salts over his head!"
"So Lidda somersaults over the Big Bad Guy's head and lands behind him and whacks him in the butt!"
Peals of laughter. Lidda sneak attacks the bugbear a couple of more times (SNEAK!), delivering a few more stings. The bugbear manages to land a few hits on Lidda though, bringing her close to the 1 HP mark.

For some reason, Mialee sidesteps the attacking goblin and makes for the final room. Entering it, she uses the Ring of Shadows to get herself to the treasure chests. Unfortunately, this depletes the ring's magic (Bzzzzrrr....) and it gets discarded, much to Jojo's disappointment. Lidda also makes a dash into the final room, with the enraged bugbear close behind her. By now, I realise that Jojo's priority list looks a bit like this: 1) Get Treasure. 2) Get more Treasure. 3) Fight Monsters - unless I see more Treasure. Which isn't really the best idea given the circumstances. I explain this to her, and eventually she focusses on knocking the bugbear's last HPs out.

After seeing their bugbear boss defeated, the remaining two goblins quail and surrender. They offer all sorts of interesting information in exchange for being set free. (Again, this is really to balance out the fact that it's 2 adventurers in a 4-adventurer mission. Really.)

Wanted: WotC Adventure Plot Writer. No experience necessary.
"The goblins tell you that the reason why the villages have been robbed is because they are looking for a special magical item called the Orb of True Seeing." Seeing the blank look from Jojo, I elaborate, "It's a Magic Orb. Like a glass ball that glows white and when you ask it to show you something or someone, it will show it to you."
Comprehension dawned. "Ohh, like the Magic Pearl in Barbie Mermaidia?"
I'd never thought that I'd thank God for Barbie. "Yes! Exactly! So you say, 'Show me where something is', and it will show it to you."
"No, dad, that's not how it works. You have to say, 'Magic Orb, Magic Orb' first."
"Right, right. But then, this Magic Orb does something more; after it shows you what you want to see, it'll vanish -poof!- and re-appear somewhere else far away." I was on a roll, so I kept on rolling. "You see, the goblins were keeping it to use against the good guys. Anyway, last week, a goblin accidentally asked the Magic Orb where his underwear was, and after it showed him that it was at the bottom of his sock drawer, the Magic Orb vanished. The Big Bad Boss was really, really mad when that happened, and he told all of the goblins to go find the Orb. And now, the goblins have discovered that this Orb is in a nearby haunted village! So you must go and find the Orb before the goblins do!"
"What does 'haunted' mean?"
"It means full of ghosts. And skeletons." I rummaged around and impressed her with a skeleton figure.
Jojo thought for a moment. "Why, dad?"
"Uh? Why what?"
"Why do we need to find the Orb? Won't the Big Bad Boss get mad at us if we found it first? Why can't we just go and find the Sheriff?"

Hmm.. the kid is right! Who writes this stuff, anyway? Even a 6-year-old can poke holes in it! I weakly forge ahead. "Uh, because umm.. it'll be bad if the goblins found the Orb first? I mean, they want to use it against the good guys, right? So we should find it before they do!"

Jojo looks unconvinced and slightly confused, but we postpone rescuing the Sheriff for later. As we pack the game away, Jojo says to me, "Your game is not a scary game, dad. It's a funny game."

Looking back, I hope she meant 'funny' in a good way.