Fight like a 6yo Girl - The Goblin Bandits (Adventure 1) 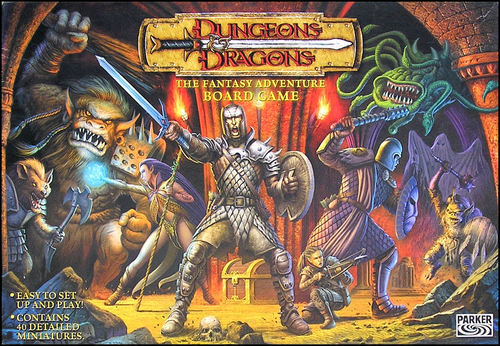 The first D&D: The Fantasy Boardgame session I played was with my wife early this year after I received this game in the Australian Chain of Generosity. After a breezy romp through the first dungeon with goblin corpses littering the end room, my wife politely thanked me for the game and announced the retirement of her heroes from further adventures and can we please play Agricola now? :-p I'm a very fortunate husband to have a gaming wife, so I count my blessings and put this game back on the shelf where it sat for months. Last weekend though, my 6-year-old daughter Jojo and I were looking through the collection for something to play when she pointed out this game.

"Let's play that one, daddy."
Hesitation. And then, "Yeah, well, sure, why not?" I'd been simplifying games to play with her all the time, so why not this one? I've DMed before, right? I should be able to roll with the punches and make stuff up on the spot, right? Heck, I do it with parenting all the time. 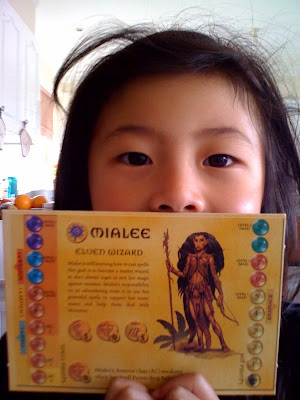 Jojo and her favourite character Mialee

We open the box and take out the heroes. "I'll play these two girls," Jojo declared, picking up the character cards for Mialee and Lidda. Immediately, I made a few mental adjustments - this is a 4-hero adventure which she's playing with just 2, so Go Easy With the Monsters. No Cleric means less Healing, so be careful with those Hits. This is a boardgame with rules and stuff, but at the end of the day, I just wanted my daughter to have fun. I explain what the symbols on the attack dice mean, and how if an adventurer loses all her Hitpoints, it means that she...
"Is killed?" she asked.
"Uh, no. Just knocked out." I say hastily.
I also exchange Lidda's Yondalla's Amulet (allows Lidda to discard the first few Treasure cards from a chest to draw another) for a Poisoned Blowpipe simply because I couldn't be bothered to explain to her what the Amulet did.

So I explain about the goblins raiding and robbing the villagers, and about the Sheriff disappearing (who I referred to as a 'she' to make things more interesting to her) "So the Sheriff went to chase the goblins away, but she never came back," I added cryptically. Mialee and Lidda readily agree to help the villagers find (and if possible, rescue) their missing Sheriff. It took a bit of tracking, but the two adventurers have now found the entrance to the goblins' hideout.


"It's a smelly place," I described. "And it stinks of goblin poop."
"Well, that doesn't bother us because we've got perfume," counters Jojo airily.

So the two perfumed adventurers open the first door and see their first goblin who is dozing at his guard post. He wakes up and sees the adventurers at the door. Before he can yell a warning, Mialee silences him with a Magic Missile. First kill -I mean- knock out to the girls! Cheers all around! (At this point, I realised that I should have deducted the Goblin's armour from the Magic Missile, but Jojo was so excited that I promptly decided that this first Goblin wasn't wearing any armour.)

I guide her through moving her adventurers towards the door in turns. "It's very important that you do this, Jojo," I say. "Because sometimes... (voice drops to a dramatic low) there are Traps around. And I need to see if you step in them."

Her eyes widened, and then narrowed suspiciously as she surveyed the board, and then at her smirking dad. I hastily reassured her that there were no Traps in the current room, but after this, Lidda will have to use her Find Traps ability to look for more traps. From here on, Jojo's adventurers started to take very hestitant, meandering steps to the next dungeon room.

So after a rather indirect route, Mialee finally gets to a chest and opens it to find a Ring of Shadows. "It's a special ring that turns you into a shadow," I described.
"You mean, like the Shadow Man in Princess and the Frog?"
"Yes, sort of. Anyway, because no one can see you, you can move to any part of the room. But once you get there, you have to roll this die and if you get a Star, the ring umm.. runs out of batteries and stops working."
"Cool!"

The next room reveals two goblins attempting to play chess on top of another treasure chest. "Hey! You're not allowed in here!" snarls one as they both rush towards the adventurers. Mialee and Lidda make short work on them, with more of the time spent on Lidda trying to decide if she wanted to use her Throwing Daggers or her Blowpipe to finish the job. Finding a few more Treasures in the chests, the adventurers open the door to the next room, revealing a large, empty and seemingly safe room.

And then it happened. Mialee steps into a Pit Trap. "TRAP!" I declared excitedly. And Jojo bursts into tears.

It took about 5 minutes for me to console her and assure her that it really was okay; Mialee just gets 1 damage, that's all. Jojo warns me never to scare her like that again, and to only announce traps in a soft voice, to which I readily agree. Then she proceeds to describe how Mialee finds a key at the bottom of the pit trap that allows her to open the trap door and escape. It was then that I realised that while I had imagined the pit trap to be a crude goblin-dug hole in the ground covered with dirt, she had envisaged that Mialee had been swallowed up by a trap door in the dungeon floor that sinisterly closed and locked itself, trapping its captive forever. It was another reminder of how vivid and sensitive kids' imaginations were, and how as the Dungeon Master, I had to be extra careful on the details of these adventures.

Lidda falls into another Pit Trap (softly - "trap.") before I remind Jojo that Lidda can search for Traps as one of her Actions. So after locating and avoiding the third trap, Mialee opens the final door to the last room. We grab initiative cards, and the goblins were going last. "The goblins see the door opening, but they don't see who's there at first..."
"Oh! Because Mialee is wearing that Shadow Ring!"
"Uh.. yeah, you're right! It's too dark to see her properly with her ring, so the goblins think that there's no one at the door."

Lidda and Mialee pepper the surprised goblins at range. When the goblins close in at the doorway (with much shoving and shouting at each other to get out of the way), Mialee uses her Ring of Shadows to re-appear at one of the treasure chests at the other side of the room. She opens it and finds a Summoning Horn (magically teleports a hero next to the hero with the horn) which I suggest that she use to magically pull Lidda away from the three enraged goblins to join Mialee at the other side of the room. Lidda continues to shower darts on the approaching goblins, while Mialee casts Unseen Servant (which Jojo gleefully calls the Big Hand Spell) to pick up one of the goblins (amidst angry shouts of, 'Whoa - what's happening!?' 'Hey! Where are you going!?') and put him some distance away.

The goblins are finally defeated, but not before Lidda is reduced to 1 Hitpoint (there was much anxiety in the last few rolls). The adventure is supposed to immediately end at this point, but I allow Jojo to open the last few chests, and declare that the very last chest contains a message ordering the goblins to wait for more goblins to arrive from the Big Hideout. Hmm.. maybe that's where the Sheriff is?

It's all maths really

So what did Jojo think about it? She absolutely loved it! While we were packing up, she was considering on enlisting her 4yo brother to play the other two heroes (she has grand plans to direct his every move), and how cool all the stuff her adventurers had. My daughter had played through an adventure, but looking back at this whole experience, with the dice-rolling and jokes, tears and joyful victory, I think I've gone through a very real adventure of my own.

Throughout the game, I made her count out all her dice rolls, and deduct the Armour from them to calculate the Damage. Later, while she was excitedly relating her adventure to her grandmother over dinner, she said to me, "We were doing maths, weren't we daddy?"

Yeap, we sure were. And having a blast doing it.