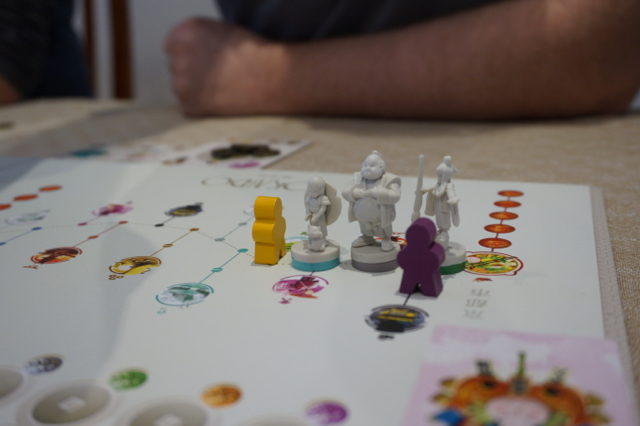 Well, another KKCon has come and gone, and what a blast it was! This year, I saw plenty of new faces (and did miss a few favourite faces - you know who you are! ;-p), but the important thing is that everyone who turned up had a whole lot of fun!

I had told Cynthia that this year I wanted a cake that everyone could actually play a game with, somewhat similar to the KKCon 2012 cake that was an actual working dice tower. Several ideas were bounced around (one involving a game of "The Resistance" where players picked cupcakes with covered icing that secretly revealed their hidden roles!), but in the end after "Codenames" was announced as the 2016 Spiel des Jahres Game of the Year, it became obvious that it had to be a "Codenames" cake. 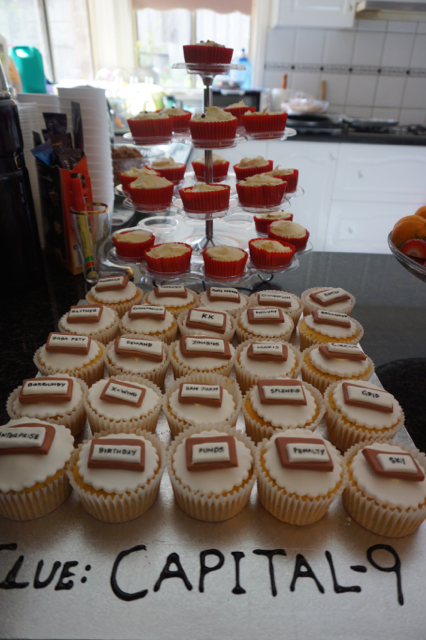 Codenames is one of those games where you play, and then wonder afterwards why no one has thought this up earlier. What I am particularly thrilled about is how well the cupcakes worked as the game. We split everyone into two groups, and both groups took turns making a single guess on what the correct codenames were. 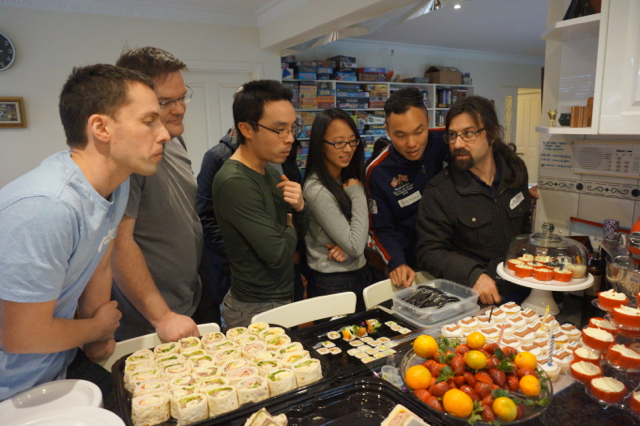 Here's "Team A" discussing the possible codenames. Apparently, these guys also tried coercing the answers out from our kids, but thankfully, I had the foresight to only prepare the cupcake words after they had gone to bed the night before! ;-) 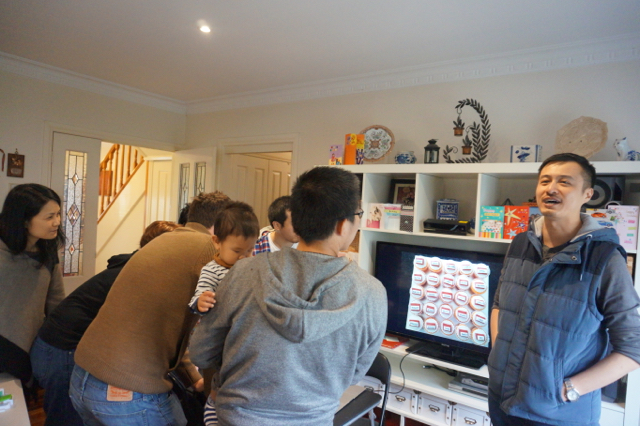 "Team B" got to see the cake displayed on the TV, complete with some fancy cut-and-paste skills to block out whatever codenames that have been guessed. I got a little worried that the codenames were too easy as the first 8 were guessed out-right, but the final codename proved too elusive for Team A, and in the end, Team B won by scoring 5 out of the 9 correct codenames! Well done, guys!

This year, the "Looping Louie Tournament" witnessed a new technique of play, which I'm terming the "Stand up Smash down" technique. 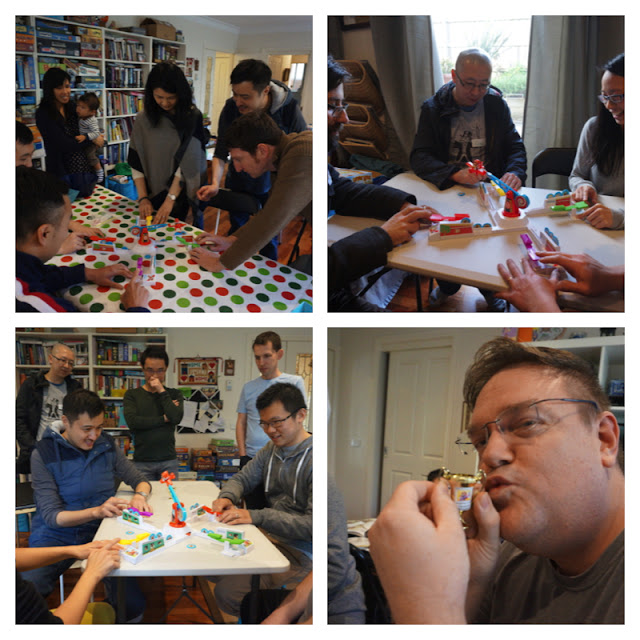 Still unsure if this technique should be regulated in future tournaments, but ultimately, the Looping Louie Champion 2016 was Jason Gentry, a long-time attendee and first-time tournament winner. Great job, Jas!

While playing, I suddenly had a bright idea for next year's tournament - we could have the first-ever "Looping Louie Doubles Tournament", where players team-up with whoever is sitting across them, and try to take down the other team. I think it'll be awesome! Of course, there'll be double trophies for the tournament winners, and some simple rules about determining which player on the winning team rescues a chicken, but I'm pretty sure it'll work out fine.

Many thanks to those who brought in games of their own and (even better!) were willing to teach them. Aaron brought in his stack of recently acquired "Peculiar Japanese Games In Little Boxes". 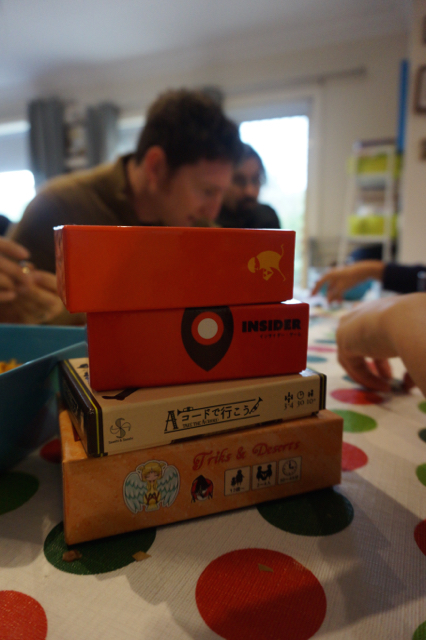 I've not played most of these, but according to Cynthia, they were really good. She particularly liked the one called "The Insider" which is a bit like "Twenty Questions" with a hidden traitor. From what I heard from the other players, Cynthia had the group completely bamboozled in one round with her sweet innocent suggestions, and off-handed accusations. Yes, I am very proud of her. 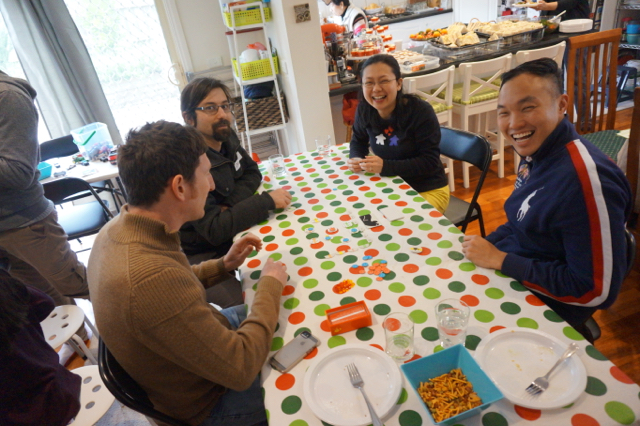 Jason brought in "Scythe" which is a curious wargame about farmers. With mechs. 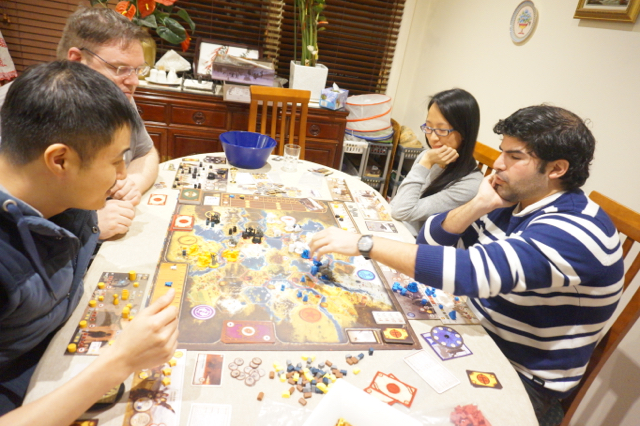 Currently, it's one of the red-hot games in Boardgamegeek, and I must say it looks pretty cool when it's on the table. I was unsure if I could play anything "heavy" during the Con, and I must thank Jason for getting this on the table, stringing me into the game, and then proceeding to school us, I mean, teach us this game. Now I can stroll around the game community and do the game-snob thing of saying, "Oh, that game? You've not played it yet? Shame." ;-)

The Raffle went really well this year, and we managed to raise a whopping $640 from donations! That's the highest collected amount we've ever had for KKCon, and it's all going to a great cause with our favourite charity partner. I really love talking about the stuff these guys do, and constantly draw inspiration from their endeavours. I only hope that whoever who hears about them will feel inspired too.

Oh, and thanks to Aaron who donated some of his own games for the raffle as well. And thanks to others like Stef for teaching Rokoko, Alan for teaching Samurai. Honestly, I'm probably missing out a whole bunch of others to thank because I have no photographic evidence! :-p But most of all, I particularly want to thank my wonderful kids Jojo and Evan for entertaining the other kids, and even teaching games to the adults! I couldn't be prouder! 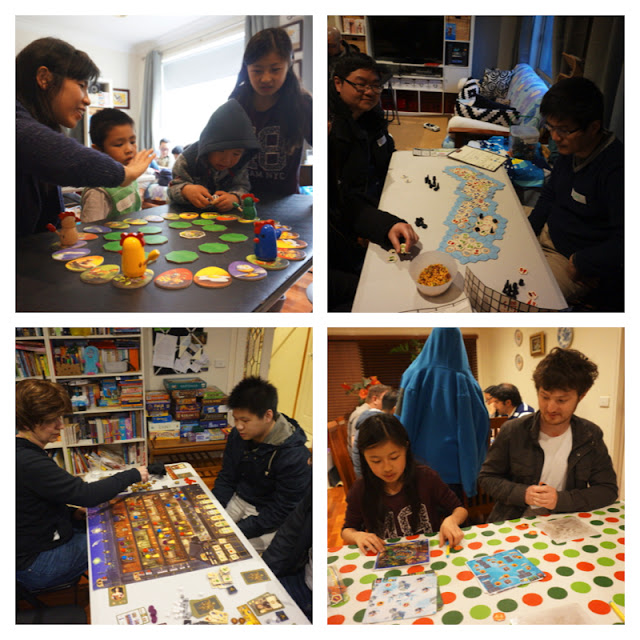 And so, thanks again everyone for a lovely birthday, and for another successful KKCon! See you again, hopefully sooner than the next KKCon, and (more hopefully) across a gaming table! :-)
Posted by KK Su at 10:12 PM